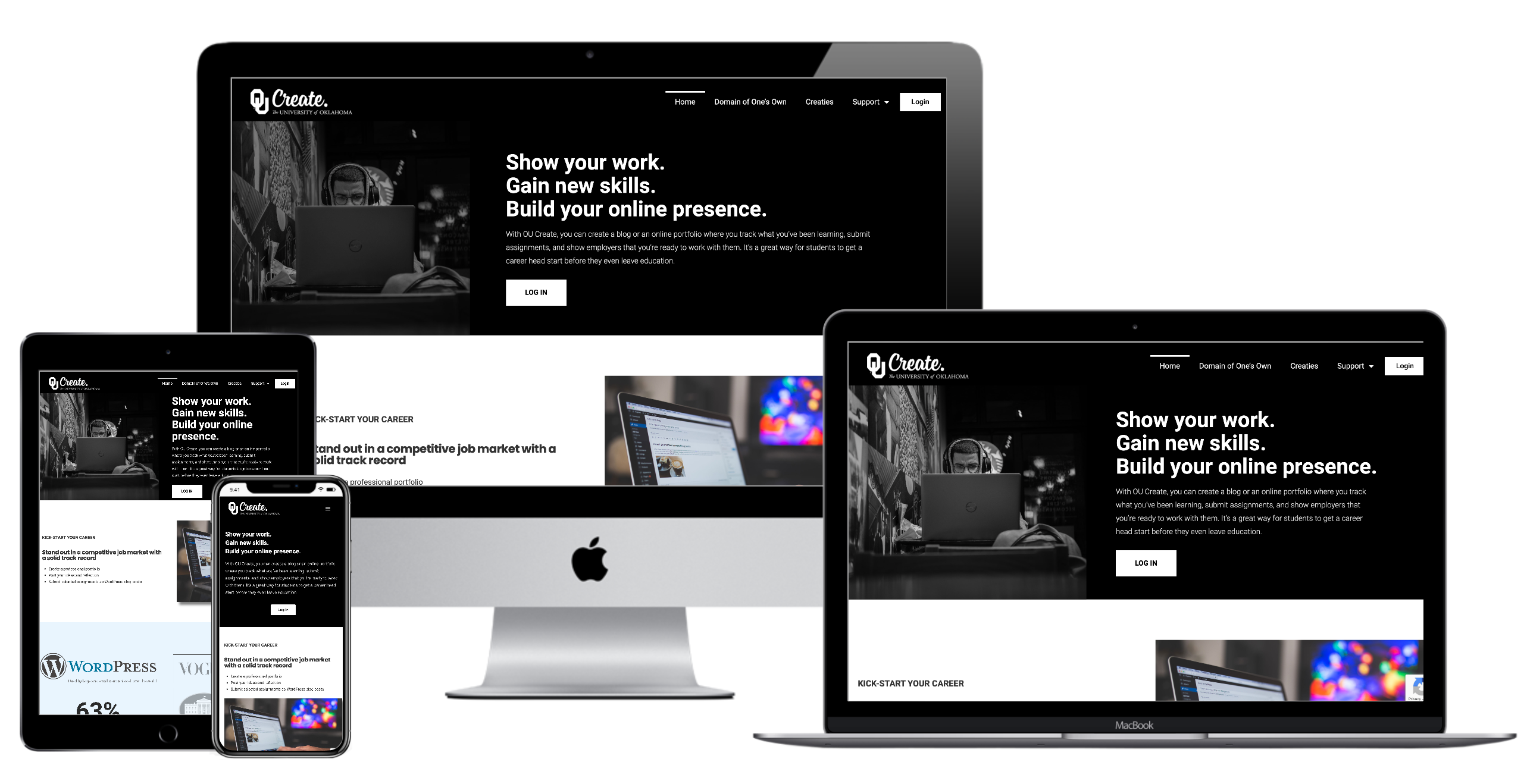 A recent tweet from Lauren Hanks reminded me that I have yet to write a recap about a recent upgrade to OU Create.

Loving the recent changes to @OU_DigLearn's https://t.co/tdyC2IGXLt! This is now a landing page for both #DoOO and #WPMS, a tried and true pairing for @ReclaimHosting schools. @JohnStewartPhD would love to hear more about your work here… this is awesome. pic.twitter.com/QNOwIY5O7t

This blog has been nothing if not a space to document and reflect on our Domain of One’s Own project at OU. For more than seven years, I’ve written about launching the project (2014), adopting it (2015), sustaining it (2016), celebrating it, and sharing it (2017) with other institutions. We even partnered in hosting an international conference about it.

The project has been one of love for us at OU and I’m proud that it has become, as much as any tool could, institutionalized. As such, we’ve spent a lot of the past few years in a “if it ain’t broke, don’t fix it” strategy. The last significant change was when we first adopted it. UMW, who inspired the project to begin with, chose to give students top-level domains. CSU Channel Islands  had recently taken a different approach by giving students subdomains with CI Keys. After one year of giving folks top level domains, we chose to blend the two by allowing students to get a subdomain for free or purchase a top-level domain. We would also honor our first year users by continuing to pay for the domain for those who are still at OU. To date we have been able to continue that commitment.

The usage of the tool has became fairly predictable. Roughly 1,000 new users join OU Create each year. This means, regardless of top-level domain purchase, we are issuing a full CPanel for each user. Despite the fact that users can create multiple sites under multiple domains, 90% of users install WordPress and the majority of our users only install one instance of the application.

This got us thinking about how we can better serve our community. If most people are simply wanting WordPress, in the short term, it would be easier for us to give users a shared multisite experience that gets them up and running as fast as possible. In the long term, this would allow us to consolidate and retire some of our older servers once students graduate. With the help of several folks at Reclaim Hosting, we were able to flip that switch this Fall and allow to simply get a WordPress blog.

This also gave us the opportunity to refresh the look of OU Create, which hadn’t happened in quite some time. Thanks to John Stewart, and some wonderful inspiration from Coventry, the site has now been fully redesigned for the new experience.

By the looks of it, it might seem like WordPress multisite would be a step back, but it’s quite the opposite. It’s just one more way in which folks can utilize the platform. Even more wild is that OU Create itself is actually just a Multisite. Multisite offering multisite inception.

We are still finding our way around both framing and supporting the WordPress multisite. We’ve learned a lot of lessons already, and I’ll leave it to John Stewart to explain those if he so chooses. I’m just proud to see the project continue to grow and evolve based on institutional/user needs and circumstances.

Inside Higher Ed Interview
EdTech(nologists) and Pockets of Hope

Rolling out a new front page for 2016