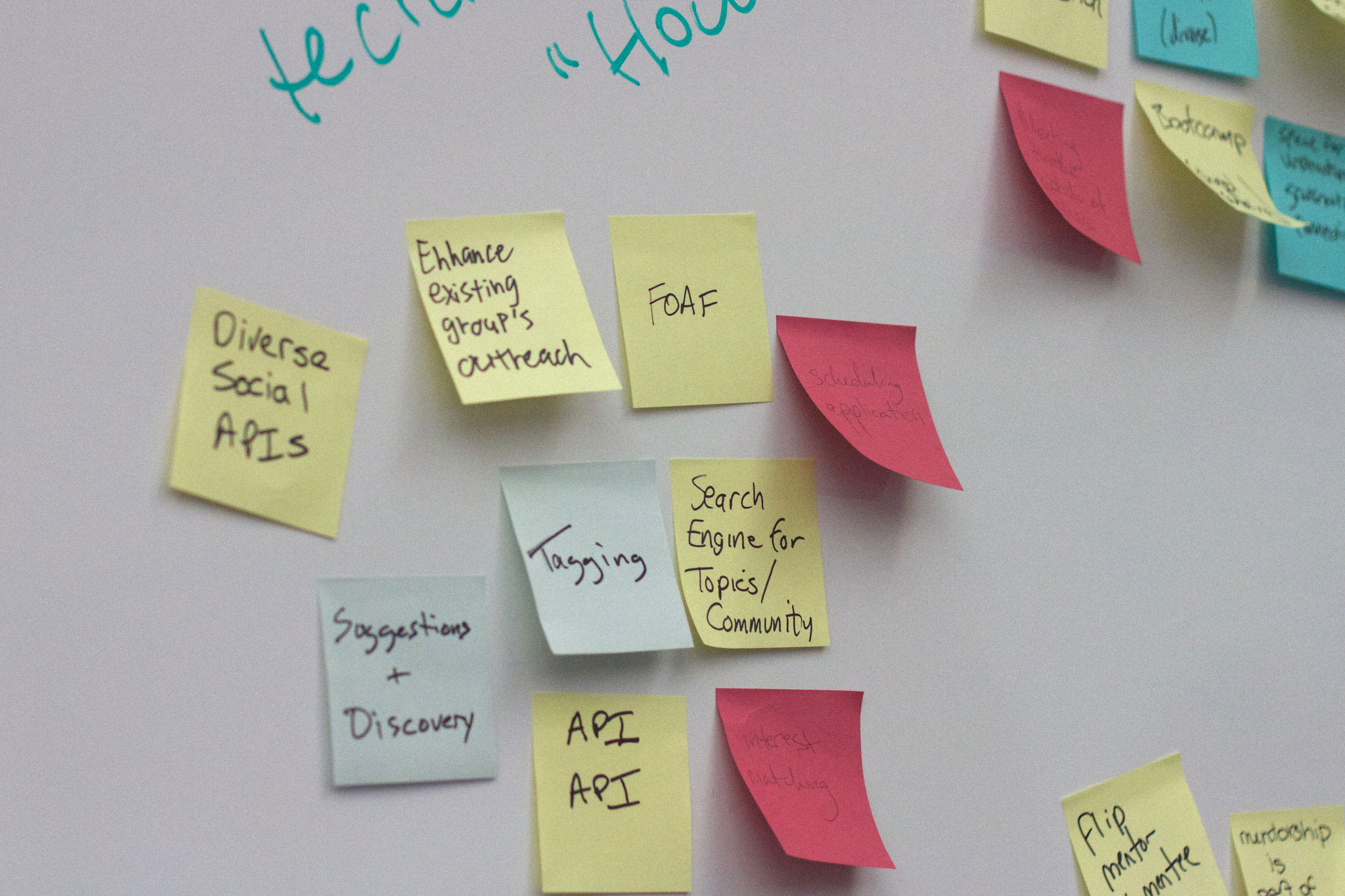 Note: This post is 2 of 3 in a recap of the Indie EdTech Data Summit: The Personal API held at Davidson College. Here is Part 1 and Part 3.

Audrey and Kin’s framework led nicely into design sprint, facilitated by Erin Richey and Ben Werdmüller of Known, who utilized the design thinking methodology to accelerate a deep brainstorming session.

My design team consisted of myself, Audrey, Alan, Eddie Maloney (Georgetown), and two students: Gage Holloway (Davidson), and Erika Bullock (Georgetown). And these two students are (underscore, bold, and enlarge this next part) the reason we ended up with anything–partially by design but also because of how awesome they are.

We spent a lot of time asking them a ton of questions about who they were and what college was like. Who are you? How did you get here? What is a normal class like for you? How do you manage “life?” What are the most meaningful moments for you? What does assessment look like?

And a theme emerged about relationships. Office hours with faculty. Instructors who related classroom discussions to life lessons. Advisers who helped them decided on a major. Bosses who were also mentors. And the lack of relationships. Seniors who were just now understanding the system. “If only I had known that I had the option to put together an interdisciplinary degree.” These were conversations about people. And these questions aren’t able to be answered by Siri. You can’t build an algorithm and you can’t automate it. It requires human interaction Any technology that deals with these problems needs to be augmented by humans.

So this led us down a rabbit hole of trying to come up with some dating-like, scheduler app that matched mentors and mentees. Woof. This was difficult. Part of the issue was, being insiders of the system, we got stuck in the minutia about the complexities of HE, like getting faculty on board. How could be build mentorship into promotion and tenure? Should we require it? Are they matched via interests or pain points? How do you know what’s a good match? And there we were again. Algorithms. Automation. Data. Blah blah blah.

This sounds like it’s a knock on dating apps and it’s really not. I’ve been convinced by several happy couples that a lot of good comes from these services. The problem here isn’t necessarily the algorithm. At least on dating apps everyone can agree that everyone on the app has the same desired goal: a relationship. Here we are trying to figure out how to convince faculty that they want to mentors and educate students on the fact that they need a mentor. And then use our little cute service. Yeah, we are really out in left field on this one. I remember Alan eventually yelling, “We have a problem! We hate our idea!”

Luckily, we had smart people on our team, like Audrey, who eventually just asked what if we stopped thinking about the idea that people need to get together to have these kind of conversations? What if people could just come get answers to questions?

Ah, yes! There was another other piece to this conversation which we had ignore which was that this was also a conversation about distribution of power. How do you know what you don’t know? How do we cultivate a conversation of caring individuals answering each others questions? How do we get students who have figured out the institutional “secrets” (or education hacks… thanks Audrey for letting us borrow Hack Education ::smile::)? How do we redistribute this power through knowledge?

Our wonderful student Erica sketched out this idea of “wants” and “haves”:

So we conceptualized this idea of building something similar to Quora or Stackoverflow where you could ask questions, but that there was a negotiation to entering the space: you had to first tell us things you were willing to answer: your “haves.”

Yep, that’s indie. Indie EdTech nurtures these communities. It redistributes power. It promotes giving as much as receiving. It urges students to move towards being authorities. It removes intermediaries.

Everything about this project was a great experience. It seems simple but, man, there’s a lot to takeaway from simply interviewing students and understanding needs. Kudos to Ben and Erin for putting together such a powerful example of how we can work towards building tools that prioritize the student. What’s even more awesome is there has continued to be discussion on our IndieEdTech Slack channel about how to continue these projects with the students being the most excited bunch. Turns out this whole Silicon Valley-based approach to design isn’t all bad after all.

Cover image: A flickr photo shared by cogdogblog under a Creative Commons ( BY ) license

Searching for Student Voices at #OpenEd16

EdTech(nologists) and Pockets of Hope

The web isn’t (just) a garden.